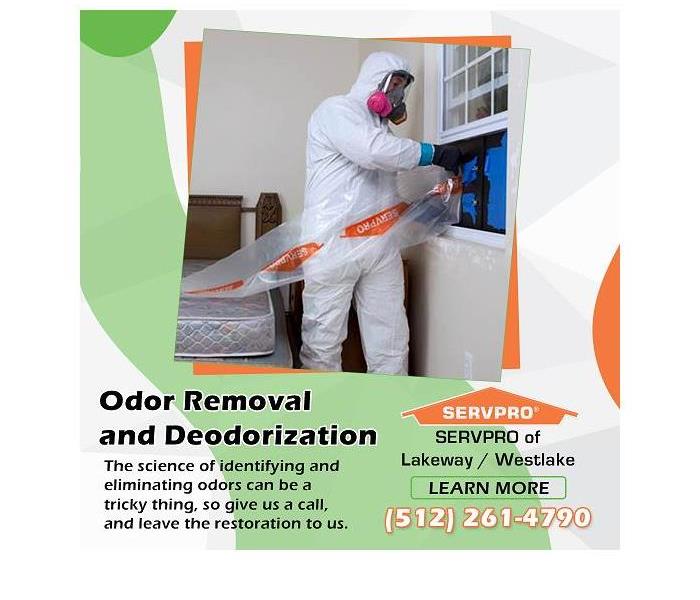 Summary: SERVPRO of Lakeway/Westlake is the odor removal expert to call when odors need professional attention.

The IICRC-certified odor removal specialists at SERVPRO of Lakeway/West Lake are ready to tackle the toughest odors, the odors that conventional, household cleaners and deodorizers just cannot eliminate.

Unpleasant and unwanted odors can occur in a home or business environment from a variety of sources. Before wasting time, money, and manpower to eliminate odors, property owners need to realize that certain types of odors require professional-level odor removal strategies involving commercial-grade cleaning and deodorizing solutions, state-of-the-art equipment, and specialized cleaning techniques.

One of the toughest odors to eliminate is pet odor. Once pet urine is absorbed into carpet padding, furniture upholstery and padding, pillows, and blankets, strong measures must be taken to eliminate the odors at the source. Simply spot shampooing the carpet may not be enough to neutralize the pet odor. Pouring or spraying heavy doses of deodorizer may cover the smell for a while, but the heavily-scented deodorizer may also irritate the sensitive noses of pets. Also, male cats can leave a musky smell throughout the house. Comprehensive cleaning and odor treatment are needed because the source of the smell is dispersed on carpets, chairs, sofas, pillows, blankets, and bedding.

Sometimes dogs, when let outside for some exercise or other activities, will come in close contact with animal feces or rotting flesh. When the pets come back into the home, their paws and fur will spread the odor-causing substances and fluids throughout the house. The house not only smells bad but also presents a health issue. Without professional intervention, skunk spray spread throughout a home by a cat or dog could linger for weeks.

Smoke odors are another offender. Cooking fires limited to the stovetop may require professional assistance for both fire damage and smoke odor. A house fire in which flooring, cabinets, and personal belongings are burned can spread toxic smoke and soot throughout the home. Extensive odor damage calls for professionals who have the SERVPRO proprietary cleaning and deodorizing solutions along with air scrubbers, ozone generators, and hydroxyl generators to remove the odors. Carpet and upholstery cleaning may be required.

A water damage incident can lead to a large-scale mold and mildew infestation. A quick response from a reputable water damage restoration could have prevented the need for an extensive mold and mold odor mitigation. Attempting to resolve a mold issue without proper training, solutions, equipment, and safety gear could lead to serious health consequences and also fail at removing the mold and mold odor.

Tobacco odors are pesky odors to remove because the tobacco smoke permeates furniture, carpeting, curtains, bedding, and clothing. Nicotine adheres to the walls and may remain there for years. If the homeowner is not careful when wiping down surfaces to remove the nicotine, they can get nicotine poisoning. Also, the tobacco smell could be reactivated. A home with heavy nicotine damage is a toxic environment best left to professionals to clean and deodorize.

Eliminating the odor from raw sewage leaking into a crawl space or basement involves many steps. The source of the leak must be located and resolved, and the sewage must be cleaned up. Any mold issues must be identified and mitigated. Odor from the sewage and any mold or mildew requires neutralization. Cleaning up this toxic biohazard is far beyond the capacity of the typical homeowner since the contaminated environment is both unsafe and unhealthy.

Removing dead animal odors first requires locating and removing the remains of the dead animal. Mice, squirrels, chipmunks, raccoons, snakes, and skunks can find their way into a home’s crawl space, attic, or walls and die. The area where the carcass was located must be cleaned, sanitized, disinfected, and deodorized. Quickly removing the odor from the structure requires high-capacity fans and air scrubbers. Special equipment may be required to neutralize odor emanating from the body fluids that have penetrated deep into the contact surface.

Stubborn, pervasive odors often require professional cleaning and deodorizing solutions and special odor-removing equipment to control or eliminate. The team of odor removal experts at SERVPRO of Lakeway/Westlake near Austin, TX, knows the potential negative consequences arising from a noxious, lingering odor. In some situations, occupants are forced to vacate the premises. In more severe cases, people fall ill with headaches or nausea when overcome by an offensive odor.

For more information about property damage restoration, contact the SERVPRO of Lakeway/West Lake office at (512) 261-4790 or email hq@SERVPRO9965.com.